The Whole Truth with David Eisenhower aims to be an unconventional public affairs series. It's a five-part series that aims to uncover the reality behind today's toughest issues, leaving the partisan noise-making and focus on short term headlines out of the equation.

Host and moderator David Eisenhower — a noted historian and author, professor at the Annenberg School of Communications at the University of Pennsylvania, and grandson of President Dwight D. Eisenhower — tackles some of the weightiest public affairs topics of our time, with a focus that’s global and long-term in scope.

His approach to political debate is rigorous, intense and insightful. Each half-hour episode varying points of view to help viewers understand many sides of the issue. The format of the show is a three-step process that includes an introduction to the topic or "the case," cross-examination and oral arguments, and a summary of "the whole truth."

This season, topics will include “The United States and Pakistan: Perhaps the World’s Greatest Frenemies”;  “Confronting Climate Change: What’s Needed, What’s Feasible, What’s Achievable?”; “American Healthcare at a Crossroads: A Conversation with Dr. Steven Klasko”;  “America’s Role in the World”; and “What is Our Demographic Destiny?”. 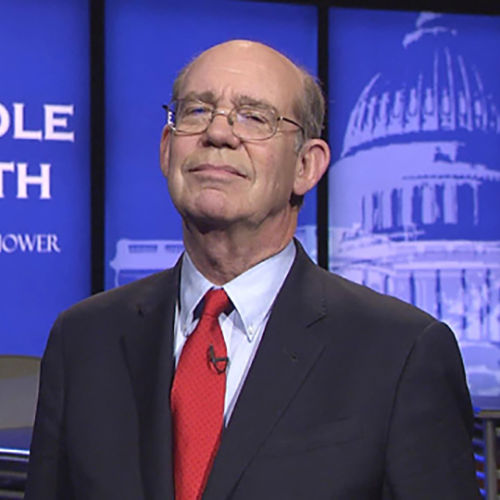 David Eisenhower, grandson of General and President Dwight D. Eisenhower, is a noted historian and the Director of the Institute for Public Service at the Annenberg Public Policy Center. He serves as a senior research fellow at the University of Pennsylvania's Annenberg School of Communication and is a fellow in the International Relations...